A Futurist and Expert in Financial Technology 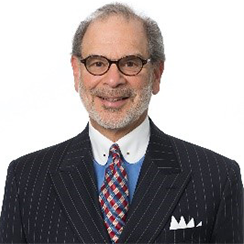 Thomas P. Vartanian is an author, financial advisor, and board mentor. He is the former Executive Director of the Program on Financial Regulation & Technology at George Mason University's Antonin Scalia Law School, where he was also a Professor of Law. Between 1983 and 2018, he chaired the Financial Institution's practices at two international law firms, Dechert LLP and Fried Frank LLP, through four financial crises. Both as a regulator and private practitioner, he has been involved in 30 of the 50 largest financial institution failures in American history.

Mr. Vartanian was Chairman of the American Bar Association's Cyberspace Law Committee between 1998 and 2002, where he chaired an international task force of lawyers from twenty countries which released a seminal report in London in 2000 on the novel issues created by doing business in Cyberspace.

Mr. Vartanian is a futurist and expert in financial technology, which has been described by clients in Chambers as "one of the best financial services lawyers in America." He is currently a member of the American Association of Bank Directors' Task Force on Bank Director Personal Liability Mitigation.

Mr. Vartanian has authored more than four hundred articles and eight books, including his new book, 200 Years of American Financial Panics: Crashes, Recessions, Depressions, and the Technology That Will Change It All, chronicling the country's tumultuous financial history and the impact that technology will have in the future.

In 2008, Mr. Vartanian was named "Washingtonian of the Year" based on his use of music and sports to raise money for charities in the D.C. metropolitan area. As a musician, he appeared in the first production in the United States in 1970 of Joseph and the Amazing Technicolor Dreamcoat. His classic rock band, The Johnny Esquire Band, has helped raise approximately $5,000,000 for charities in the Washington D.C. area over the last twenty years. Mr. Vartanian also founded and plays for the Washington All Stars, a senior baseball team that has raised $500,000 for Special Olympics.

For a current list of Mr. Vartanian's most recent Publications and Appearances, visit --

A more complete list can be found at www.thomasvartanian.com

For a current list of Mr. Vartanian's 2022 Appearances, visit --