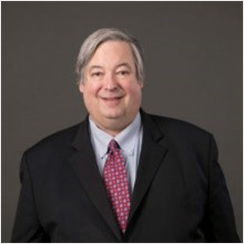 Robert H. Ledig is Managing Director of the Financial Technology & Cybersecurity Center. He is an Adjunct Professor of Law at George Mason University's Scalia Law School teaching Privacy & Information Security Law. He has been a partner at Vartanian & Ledig, PLLC, a Washington, D.C. financial services law firm, since 2018.

He has extensive experience in banking and financial services regulation and related financial technology, privacy and information security, corporate, securities, administrative law, and litigation matters. He has written and spoken widely on financial services issues.

He is an editor and author of a number of books, including: The Volcker Rule: Commentary and Analysis (Thomson Reuters 2014), Dechert LLP's Analysis of Financial Regulatory Reform [Dodd-Frank Act] for the American Bankers Association (2010), 21st Century Money, Banking & Commerce (1998), Management of Risks Created by Internet-Initiated Value Transfers (National Automated Clearing House Association 1995), The Fair Lending Guide (Glasser Legal Works 1995), and Contracting with the RTC and FDIC (Prentice Hall Law and Business 1991). He was Chair of the Electronic Financial Services Subcommittee of the Cyberspace Committee of the American Bar Association.

He practiced law in the Financial services groups at Dechert LLP and Fried Frank Harris Shriver & Jacobson LLP from 1984 to 2018. Prior to that, he was an attorney at the Federal Home Loan Bank Board.

He has a J.D. from George Washington University Law School and a B.A. from Harpur College at the State University of New York at Binghamton.

Co-author, Contracting with the RTC and FDIC (Prentice Hall Law and Business 1991)

So Your Company Has Suffered a Data Security Breach – What Next? Consumer Finance Law Quarterly Report, Summer 2006

Legal and Business Implications of the Future of Electronic Payments, Electronic Banking and Commerce Report, April 2004